Inspired by something similar I saw at my local Ikea, I decided to make this DIY teddy bear shadow box for my brother, Niall. He’s 22 now, but when he was a kid, he loved pandas.

This DIY teddy bear shadow box is easy to create, can be easily adapted to different scenes, characters and personalised depending on the time and materials you have on hand.

How To Make A DIY Teddy Bear Shadow Box

Start by unpackaging the frame and dissembling it so you have each of the shadow box frames components separate.

Doing this can hurt your hands, so I carefully use scissors or a sharp knife to pull the attachments up instead.

Next, you’re going to want to trim the coloured card so it fits the backing of the frame. I used a guillotine, but you can easily use scissors instead.

As I had an A4 coloured card sheet alongside a square frame, I had to trim the card and then use the remainder to cover the rest of the frame. I positioned the joining card at the bottom so the majority would be covered by the artificial foliage.

I then used superglue to glue the coloured card to the back of the frame. If you don’t have superglue, you can easily use a hot glue gun instead.

Then I began removing the artificial leaves from the pot. If you’re leaves or foliage is already dissembled you can skip this step.

One removed trim your foliage to the required size using scissors. I measured mine up against the frame, and decided I’d like it to be thicker around the sides and slightly lower in the centre.

Once you’re happy with the foliage go ahead and get the centre of your shadow box and apply some super glue or hot glue from your glue gun to the bottom.

Apply the foliage to the bottom of the centre frame. I waited for each layer to dry before adding another layer of glue and another layer of foliage, especially at the sides where I wanted to demonstrate the density of the plant.

It doesn’t matter if the foliage sticks out as it’s going to be pushed into position due to the pressure of the frame.

Next remove any film from the front cover of the frame, and any tags from your teddy.

Then insert the front panel into the frame, followed by the centre panel with the foliage. Using your hands, manipulate the foliage, turn the frame around to check everything is in the right place.

Next, position your teddy into the frame. Again you may want to put the back of the frame on loosely and turn the frame around multiple times to see which position is best for the teddy bear.

Once you’re happy with the bear’s position, firmly fix in place the back of your frame with the glued coloured card. From there, your DIY teddy bear shadow box is ready to be hung on the wall. 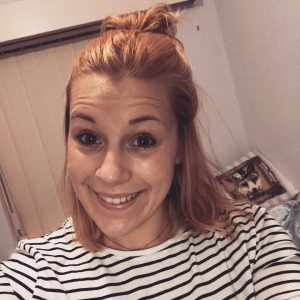